Cooperative restores land to better than before

The cooperative has restored thousands of acres of once-mined land to productive pasture, forests and wetlands and received national awards for its “exemplary reclamation," which exceeds the state’s bond release requirements in terms of revegetation and post-mining land use.

Falcons, osprey, kestrels, eagles, deer and turkey are just some of the many species benefiting from Associated Electric Cooperative's careful environmental stewardship.

Nominated by the Missouri Department of Natural Resources, Associated Electric received the U.S. Department of Interior’s highest honor for its innovative, successful reclamation that improved water quality and transformed 1,000 acres mined by a previous owner into productive pasture, wetlands and forest.

Our reclamation achievements complement our work to improve air quality. In the mining business from 1980 to 1993, Associated Electric closed its mining operations and was one of the first to convert its coal units to 100 percent low-sulfur Wyoming coal, reducing sulfur dioxide emissions 90 percent and meeting the 1990 Clean Air Act Amendments.

About 1,400 acres of mined land was reclaimed by 1998 with a $1.8 million bond release. This was followed by additional bond releases on reclaimed land totaling 7,362 acres. About 800 acres remains for reclamation and bond release.

The Interstate Mining Compact Commission recognized Associated Electric as a national leader in mine reclamation with its 2007 Kenes C. Bowling National Mine Reclamation Award in the coal category for reclamation of the Bee Veer Mine in Macon County, Mo.

The Missouri Department of Natural Resources nominated Associated Electric for the award, noting our “exemplary reclamation" quoted above and for Associated Electric’s prominent achievement of restoring water quality of the South Fork of Claybank Creek.

Today, on formerly mined land, as well as land that was never mined, are ponds that provide fishing and wildlife habitat, woodlands that provide shelter for many species, land leased to neighboring farmers for pasture and soil and crop research.

When you walk the reclaimed fields, woods and wetlands of the Bee Veer Mine, you simply can’t imagine it was ever a strip mine. The grass is high for cattle grazing, turkey and deer are back, and the fishing is good.

Associated recognized for restoration and reclamation

Associated Electric received the nation's highest honor -- twice -- in mining reclamation from the U.S. Department of Interior for its reclamation of the Bee Veer Mine near Macon, Mo. 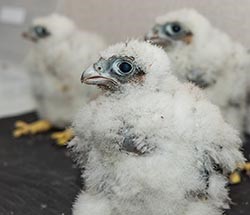 Associated Electric has successfully hatched peregrine falcon chicks from a nest box on the Thomas Hill Unit 3 emissions stack. These four chicks hatched in 2017 -- the fruition of a program that began in 2004 at the cooperative's New Madrid Power Plant to help restore the once endangered peregrine falcon. It was later expanded to Thomas Hill.